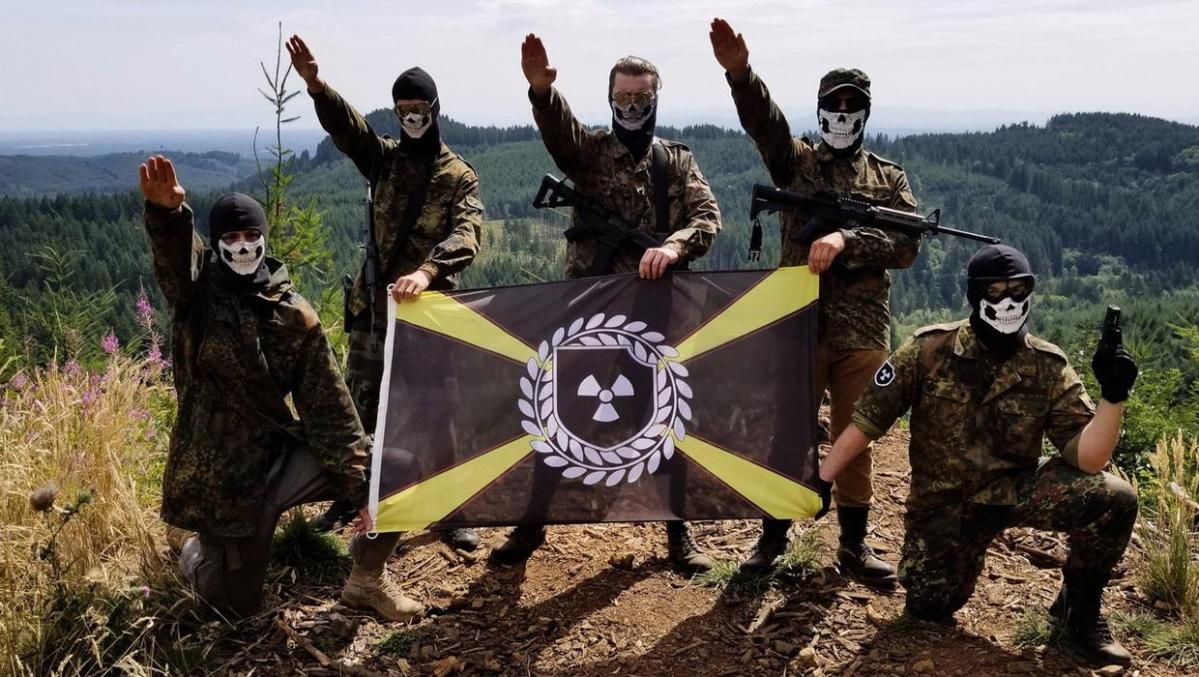 It would seem that the disease known as fascism is growing in eminence on the world stage right now, especially with the activities of a network known as the Atomwaffen Division gaining prominence (alongside a peek at what goes on beneath the surface). Fascism has long been an ideology that makes use of young men who are disillusioned with society, almost always from the ills of liberalism and capitalism. These men are easy targets, and fascism needs minds it can mould and shape to its own desires, or rather the desires of an authoritarian leader and government.

One of the latest instances of this was last week in Estonia, where police there discovered the identity of the leader of the Feuerkrieg Division, the Atomwaffen Division branch of the Baltic countries. While it is not uncommon at all for members of these fascist cells to be adolescents, there was a surprise in store as the leader was found to be only thirteen years of age. He chose the moniker “Commander” and anonymously led the group over the internet, sharing instructions on how to make bombs, planning to instigate an attack in London and proposing the establishment of training camps. Under Estonian law, he cannot be prosecuted due to his age, and so other means must be conceived in order to guarantee a halt to his engagement and leadership of the group.

As outrageous as this sounds, the Atomwaffen Division and similar groups have plenty other aspects to them that would outrage all humanity. It has cells in as many as 70 countries around the world, all vying for one goal: the advancement of their particular brand of extreme neo-Nazism. So extreme that even white supremacists in general consider them too much. They follow accelerationism, believing that what they wish to achieve can only be done through the total collapse of modern society as we know it, not just liberal democracy, but the loss of all infrastructure. Out of the ashes will emerge a chaotic land, but one that is exclusively for whites. They are also distinguished by their amalgamation of far-right ideology with occultism. While it is not unheard of in fascist circles, they have been seen to practise a particularly brutal form of Satanism, that sees pain inflicted on others as strengthening the aggressor. Through this, more and more cruel acts manifest themselves on their quest for their own twisted view of empowerment.

The UK faction of Atomwaffen Division is called Sonnenkrieg Division, and made headline news after two of their teenage members appeared in court after calling for the death of Prince Harry and Meghan Markle, due to her being mixed race. They are seen as a continuation of National Action, another UK-based fascist group that also operated in secret and had a heavily restricted membership. These groups coordinate with one another across Europe and beyond.

Recently, a group calling themselves The Base came to the fore as the US’ node in this network. Their ideology follows the usual tack of yearning for a white ethnostate, facilitated by the usual militarist tactics, but have shown themselves to be perhaps the most active faction. White supremacy has long been an issue for North America, so it is not surprising to see this. They have borrowed the concept of what is called the Northwest Territorial Imperative from similar groups, an idea that has been around since the 1970s. It postulates taking the area that makes up the Pacific Northwest in the US and turning it into this white ethnostate. The reason this region is favoured is because of its lack of racial diversity compared to the rest of the US, and that the land is also made up of mostly open and largely untouched natural landscapes, which would allow its residents to live a life of harsher, but ultimately hardening conditions.

“The Base” is a rough translation of Al-Qaeda, which continues the trend of white supremacist groups taking inspiration from violent Jihadist groups. They have shown themselves to be quite engaged, setting up multiple training camps where their members learn skills from one another that, as they see it, will prove useful in the collapse of society that they wish and strive for; for example, by training in the use of a wide variety of weapons and survival skills. An antifascist journalist managed to infiltrate the group recently, and over months collected various items of evidence that exposed the group’s activities, including encrypted message conversations, audio recordings, plans for attacks on synagogues, and the setting up of the training camps. It also revealed the identity of the leader of the group, an American military and security contractor living in Russia called Rinaldo Nizarro, who masqueraded himself online as Norman Spear, amongst other names.

As a result of a domestic terror investigation, the FBI managed to arrest seven other members a few months ago, who were planning to go to a gun rights rally in Richmond, Virginia, in order to sew chaos. They intended to carry out attacks at the rally, with the hope of killing police officers for their valuable high end gear and spreading the word of their ideology. On top of this, there even plans to poison water systems and derail trains.

A strand that has also woven into this network is ecofascism, a newer trend that, like fascism in general, is finding that its view are seeping their way into the mainstream and being normalised. It is an ideology that seeks to tackle climate change, but without a doubt mostly only as some sort of twisted justification for their views. They posit overpopulation as the main cause of the climate crisis, which is very wrong in itself, but as well as this, they also overtly want to kill off migrants and refugees in western countries, claiming this is the most effective solution. While general society is not quite at this stage yet, overpopulation being responsible for climate change is alarmingly becoming more and more of a mainstream view, spurred on by politicians, news outlets and well-regarded public figures espousing it as the truth. It completely disregards the fact that capitalism is clearly the one enormous factor contributing to the crisis, amongst a few small ones. There have been instances of Atomwaffen Division's actions that have taken on ecofascist ideas, including an attack on a mink farm in Sweden that was carried out using arson, with a video claiming and providing proof of responsibility from the faction being posted online. While we do not have sympathy for the farmer of such a disgusting industry as mink farming, we will not encourage direct action being taken out in the name of fascist ideology.

Going further than their training camps, they have also been known to use real warzone situations to further hone their skills. Of particular interest to them is Ukraine, specifically the Donbass region, which is the grounds of a conflict between pro-Russian separatists and the Ukrainian army. The fascist segments are with the latter, with army factions such as Azov Battalion and Right Sector espousing far-right views. Fascism is becoming horribly normalised in Ukraine, and neo-Nazism is rife in Donbass.

The threat of these groups is becoming more apparent as time goes on, and is evidence of neoliberal capitalism crumbling. In the wake of these collapses, we often see far-right and far-left groups rise to prominence and therefore varying levels of conflict between the two. Symptoms like this cannot go ignored, and an antifascist wave must rise to meet this danger.