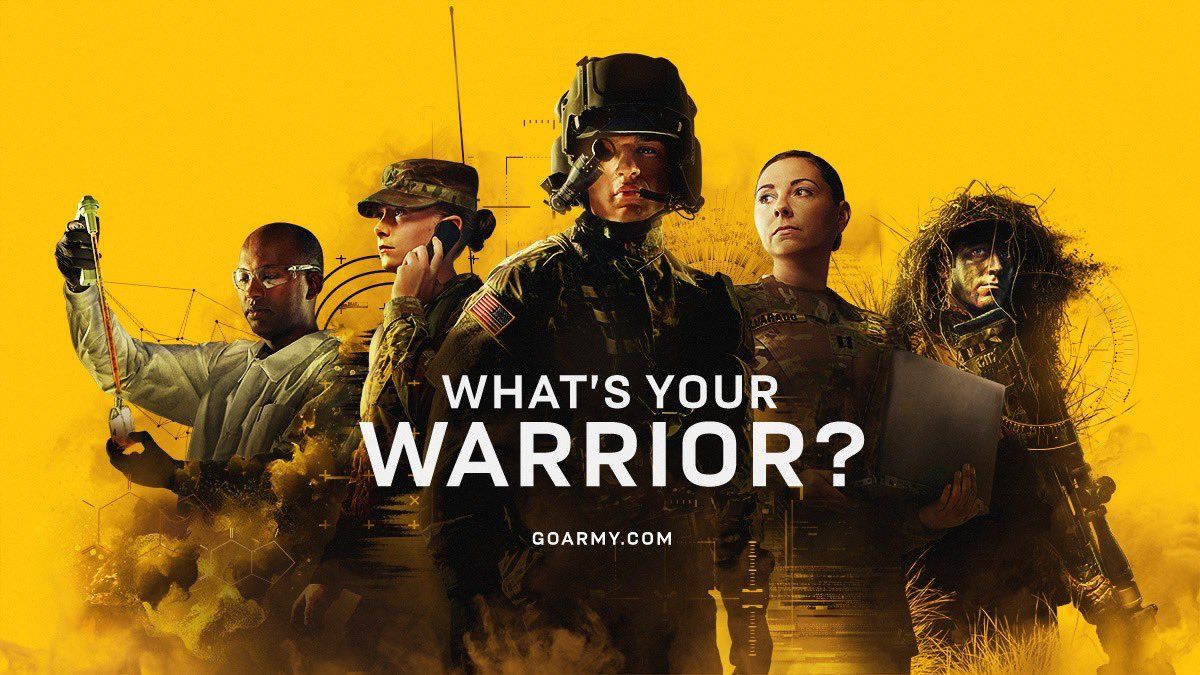 When you see a military recruitment ad, do you wonder: 'Oh, who are those planes bombing?', 'Where are those tanks going?' etc? Alternatively, do you just assume 'Ah of course they are bombing and the tanks are going,' or not even think about it at all? When you watch a new action movie, do you think about how the US military is being portrayed, or does it just feel obvious and natural that the military are the good guys? The US military budget is the largest military budget in the world and takes up more than half of the total discretionary budget of the US. However, whenever this is brought up it's treated as a taboo subject, many people seem to not be able to fathom even thinking about the billions of dollars the US puts into weapons and warfare. Any time the military is brought up, it's more seen as a force of nature or a fact of life than a section of the government that needs to be accountable and criticised. Just about anything that includes the US military portrays it in a positive light, from movies to video games to even clubs for children. The military seems to transcend politics, becoming apolitical. Why is the military, an extension of the government and violent arm of the ‘leader of the free world’ viewed this way?

The US has committed and been implicated in near countless war crimes. From coups in Latin America to the killing and abuse of civilians and horrific torture, the US has time and time again spread terror throughout the world. Just look at the Iraq and Afghanistan wars. From the Human Rights Watch (HRW) Report on Operation 'Enduring Freedom' at least one thousand Afghans have been taken into custody (at time of the report) for largely no apparent reason, deadly force has been used (such as gunships and large weaponry) on what are 'small law enforcement operations'. They also state that no one being held by the US since the start of the war has been tried of any crime, let alone even being accused of one. This specific report goes into detail about abuses during arrests and detention, but also gives some insight into other atrocities like drone bombing civilians and attacking villages.

The first case the HRW pulls up is Ahmed Khan, who was arrested with his two sons whilst a neighbour, a farmer, died from US gunfire. Khan’s possessions were taken and his house was torn apart by bullets. Khan and his sons were eventually released and he took in the farmer’s children. The other cases include violently abusing children, arresting innocent people, US soldiers attacking and bombing civilian buildings from helicopters, causing miscarriage; the report goes on for 62 pages. And that is just the portion on arrests, there is a whole other portion about treatment in detention.

To go for another example just look at the drone strikes under Obama. The drone strikes almost always rely on faulty intelligence and end in innocents dying. Between 2012 and 2013, 'U.S. special operations airstrikes killed more than 200 people. Of those, only 35 were the intended targets. During one five-month period of the operation, according to the documents, nearly 90 percent of the people killed in airstrikes were not the intended targets', but these civilian casualties are often labelled as enemies. The military clearly does not care about saving people, spreading democracy, or even ending the war they are in.

So there appears to be a disconnect between the military's actions and how the military is portrayed. Take for example Call of Duty or any one of the hundreds of military movies out there. If, sadly, you know anything about Call of Duty, you would know that it is not seen as ‘political’. But how could an entire franchise based around the US military be apolitical? Would a video game that portrays a country’s fighting force attacking another country have to be political? Well apparently not. What the military does, and even the idea of the military as an attacking force, is so ingrained in our culture that it's more seen as a fact of life than as a political decision. Call of Duty has the “Good Side” (The US Military), and the “Bad Side” (Russia, a generic middle eastern or eastern european country, China, North Korea, etc). At first glance the story could be seen as somewhat harmless, the bad guys are the epitome of cartoon villainy and the good guys are the good guys. Though I will not go into too much detail as Jacob Geller has made an excellent video about this already. Though this is not a new phenomenon. The US military has purposely infiltrated Hollywood since WWII, revising and editing scripts to edit out anything possibly critical of the military. Though this was not just to paint the US favourably, but also to demonise enemies and rivals of the US and to assist in the Red Scare. One example the the cited article gives is the military redoing the ending of Animal Farm (animated film), turning it into an allegory about communism rather than totalitarianism generally, and to try and inspire the Soviet states to revolt.

However, the military does not just appear positively in video games and media, but it is even advertised to children. I could go on about toys and such, but I will specifically talk about The Recruits documentary (which can be found on MEANS TV but the trailer can be seen here). This documentary is about the Young Marines, which is a 'national youth program for boys and girls, ages eight through high school, focused on leadership, citizenship through community service, self-discipline, and living a healthy, drug-free lifestyle' according to the website. In reality, it's a child recruitment program. Most of the children who become Young Marines go on to enlist in the military. The children are taught military drills, obeying authority, why the US military is good and they should join it, and other basic military training. The documentary follows four children, ranging from ages 8-15, who each joined for different reasons. One joins because he has a family member who he looks up to who is in the military, the second joins because of his desire to be an engineer for NASA, but the space camps cost too much for his family to afford, the third joins out of a desire for adventure and a childish view of the military, and the last one joins because his parents forced him to. The last child is actually quite fearful to join, remembering that his brothers came home crying from it. One guardian is fearful that the program will turn the child into a soulless robot. The documentary follows these children through the recruitment training, through various drills and classes. One chant they are taught to recite is: 'And I will never do anything that will bring disgrace upon my God, my country and its flag, my parents, myself, or the Young Marines, semper fidelis '. All of this is just in the first part of the documentary. These children are drilled with the philosophy of US militarism (there is literally a 'Don’t Tread On Me' flag in the classroom), taught how to unquestionably obey authority, all to one day send them off to war so they can likely die. The documentary interviews Mike Kessler, the Executive Director for the Young Marines international. Kessler claims that they are not trying to recruit 8 year olds into the military, but strongly encourage those children to join the military when they can. 'The Young Marines unequivocally encouraged joining later' says a former Marine who was also a Young Marine. The teacher offers to go with one of the Young Marines to sign up, further putting on that pressure. This may seem like an extreme example but the first scene we see the Young Marines in is a parade. These child recruits are paraded and advertised around, and many people see that as a completely normal, even good, thing.

Children dressed up in soldier's garb carrying a flag. However, this is just a more blatant example of how the military normalises itself to us. These children are unquestionably indoctrinated into something they don’t fully understand and are sucked of their individuality. They are taught that the Marines are cool and that the US military is the ultimate force for good, some of these kids already expressing that they are ready to die for their country and the world is out to get them for being Christian or American.

The military normalises itself through many methods, from more obvious ones as military movies and video games, and in more abstract ways, such as the glorification of violence and indoctrinating youth. The military benefits from this by gaining more bodies to throw at whatever war they want us to be in and the freedom to do pretty much whatever they want without any repercussions. This is why the US military is seen as apolitical, they have successfully normalised themselves and many innocent people have paid the price.