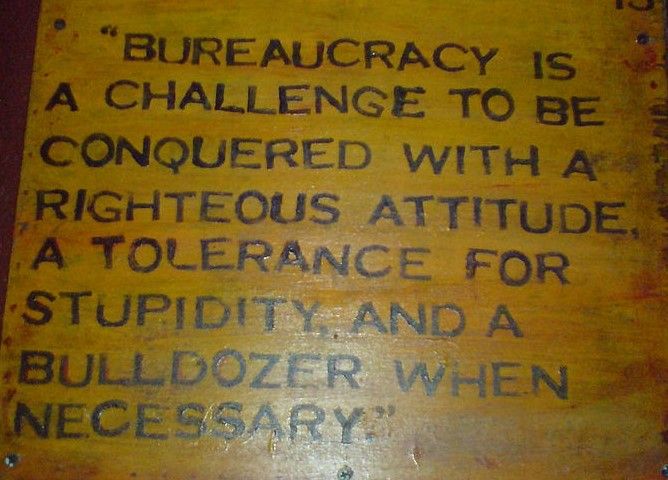 Someone must have slandered Josef K., for one morning, without having done anything truly wrong, he was arrested.

With possibly one of the most famous opening lines in English literature, Franz Kafka began his novel, The Trial, with an abrupt statement of fact. His protagonist had been arrested by unidentified agents, and was soon to be dragged through a drawn out, mysterious judicial process dictated by a remote, unspecified court authority. His crime? He has no idea, and he nor the reader will ever find out.

Kafka's novel has many interpretations, but has become well-known for portraying the perils of an inhumane bureaucracy that has been given full autonomy to rule over people's lives. In this case art does certainly mimic reality, for bureaucracies and bureaucrats are often stereotyped as cruel, heartless machines serving nothing but the needs of their governments. Whether it is being on the receiving end of a court warrant for eviction, having your welfare application denied, or simply being sent a parking ticket, our daily experiences with the state bureaucracy do nothing but reinforce this stereotype. The tactics that are used to control our lives (laws, courts orders, sanctions etc...) are administered by human beings that, for all we know of them, may as well be faceless robots.

However, for all we may hate them, our political imagination is trapped within their confines. Despite their mystery and apparent heartlessly, the existence of the bureaucrats is treated like a given fact, a necessity for administrating the complexity of a modern state. As pointed out by David Graeber in The Utopia of Rules, humanity's utopian visions, whether 'socialist, free market, or for that matter religious fundamentalist', treat an effective bureaucracy as the 'cornerstone' of their project to bring coherence to the social order. It is only anarchism that has consistently stood in opposition to this trend in its refusal to see bureaucracy as a neutral tool, or as a body that may be used to serve the demands of the people.

So why do they stand in opposition? Well, to understand that it might be more useful to turn to somebody who is not an anarchist but who will be well known to some of you. That somebody is Max Weber (1864-1920), a German sociologist who had a particular interest in the development of capitalism. Much like the famous critic of capitalism, Karl Marx, Weber placed a great deal of importance on the effects of the 'division of labour', that being the specialisation of individuals into specific, repetitive job roles. This specialisation, which allowed for more productive and complex industrial processes within the economy, would in turn lead to its greater 'rationalisation', or in other words, a greater desire to explain and understand society and its functions as a set of logical processes.

If you then chuck some new technology into the mix, as was the case with the Industrial Revolution, then you now have a highly productive, but also highly complex, form of production. If this production is then developed and controlled by various capitalists, whose entire existence is predicated on maintaining and expanding that production on a competitive marketplace, then you truly have one complicated, threatening beast to wrestle with.

To Weber, it was this complex muddle of marketplace transactions, stock exchanges, property rights and intense competition between firms that demanded the development of an organised, professional and impersonal bureaucracy. Though previous societies have had their own bureaucracies, it was the emergence of capitalism, and the increased desire to rationalise and control its productive functions, that truly expanded its administrative capabilities.

It is importance to stress that, unlike Marx, Weber saw the bureaucracy as both a method to control the effects of the division of labour, and a direct socio-political result of it. As noted by the sociologists Anthony Giddens:

It is basic to Weber's sociology of modern capitalism that the phenomenon of specialisation of occupational function is by no means limited to the economic sphere. The separation of the labourer from control of his means of production which Marx singled out as the most distinctive feature of modern capitalism is not confined to industry, but extends throughout the polity, army, and other sections of society in which large-scale organisation become prominent.

The expansion of Weber's theory of bureaucracy into the socio-political gave him a perspective on it that differed from Marx; that being, that the perils of bureaucracy (its impersonal nature, its separation from the people) were baked into it during its creation. Simply changing the economic system will not alter this, for the bureaucracy will still seek to rationalise and control society in a similar manner.

In fact, this remained one of Weber's enduring critiques of socialism. In the words of Giddens, 'there can be no possibility of the transformation of the bureaucratisation of social life through the occurrence of socialist revolution', not simply because it will maintain a bureaucracy, but that such a bureaucracy will need to be expanded in order to centrally control all forms of production, now that nothing will be left to the remit of the private sector. It is notable that although socialists (I use the term here to mean the non-libertarian tradition, or state socialism) have made criticisms of the bureaucracy, with Marx even calling it 'a circle from which no one can escape', Weber considered those criticisms inadequate. The process of rationalisation, of attempting to explain and control societal functions, will expand with the further control of the economy by the state. This, in turn, will expand the administrative power the bureaucracy has in the daily lives of the people.

Although the two strands of thought come to different conclusions, it is not hard to see the parallels between Weber's critique here and that of the anarchists, who argue for a decentralised, non-bureaucratic form of planning. What the anarchists add is that the bureaucracy, as an arm of the state, is an extension of that state's ruling class. See, for example, this quote from Herbert Read's Poetry and Anarchism (1938):

(...) a bureaucracy has nothing in common with the people; it is a parasitic body, and has to be maintained by taxation and extortion. Once established (as it has been established for half a century in England and as it is newly established in Russia) it will do everything possible to consolidate its position and maintain its power. Even if you abolish all other classes and distinctions and retain a bureaucracy you are still far from the classless society, for the bureaucracy is itself the nucleus of a class whose interests are totally opposed to the people it supposedly serves.

The ignorance of this fundamental character of the bureaucracy is one of many failures in the state socialist or Marxist-Leninist program. For, even if they might criticise the bureaucrats of their respective nations, they have neither the political imagination nor the revolutionary framework to get rid of them. In the case of Soviet Russia, for example, the new revolutionary leaders, when faced with a need to administrate their new socialist state and increase its production, relied heavily on capitalistic modes of organisation. Choosing to ignore the perils of bureaucracy, the Soviet leadership trained 'a bureaucracy as the managerial stratum in production' whose only connection to the working-class was its personification under the "workers party". As explained by Cornelius Castoriadis, 'the decision to place a manager at the head of a factory instead of a workers' board' held 'no political significance', but was simply accepted. Their 'need' to create a separate social category to manage production, for a party of bureaucrats to manage the state, was taken as political fact and was central to Bolshevik ideology.

It may have been a hundred years since that revolution, but the base nature of the state has not changed, and neither has the revolutionary strategy of the state socialist. Unless we are to speak of Council-Communists or Libertarian Socialists, the bulk of Marxist and Socialist thinking is still reliant on the state and the bureaucrats for their vision of a new society. No matter what any modern Marxist-Leninist might say about the 'new material conditions' of today's age, their idea of a revolution will replicate the exact steps taken back then. This is not a snide put-down, but a reality of a political thinking that has remained in stasis since the revolutions of the early twentieth century. Other Marxists, like those you might find in the UK Labour Party or in the DSA, are no different in their reliance on state functions for their image of a new society.

The only way for us to break free from the grip of bureaucracy is to radically alter the way we organise ourselves as human beings and as human communities. As written by Kropotkin:

It is essential that we create modes of organising that do not rely on the presence of unaccountable bureaucrats. For many an anarchist this entails the creation of networks of smaller communities, each in direct democratic control of its own production, and administered by people who are both commanded by the community and may at any time be re-called and replaced by it. There are three conditions by which we might test new administrative units, these are, as Colin Ward lays them out, whether they are:

The key to avoiding the perils of bureaucracy, on top of providing an administrative service that is accountable and whose decisions, unlike our hugely autonomous modern bureaucracies, are controlled by the community, is to ensure that they are: functional, so created for a specific purpose; temporary, so broken down once their purpose has been served, and small, with smaller administrative units answering to the community, rather than a large bureaucracy answering to its own hierarchical leadership.

It is essential that we explore these options, lest we fall into the trap of ignoring the pitfalls of the bureaucratic system.

Image by Ben Woosley on the Wikimedia Commons

If you want to help us develop our publication and continue to publish new anarchist content, please consider becoming a patron: