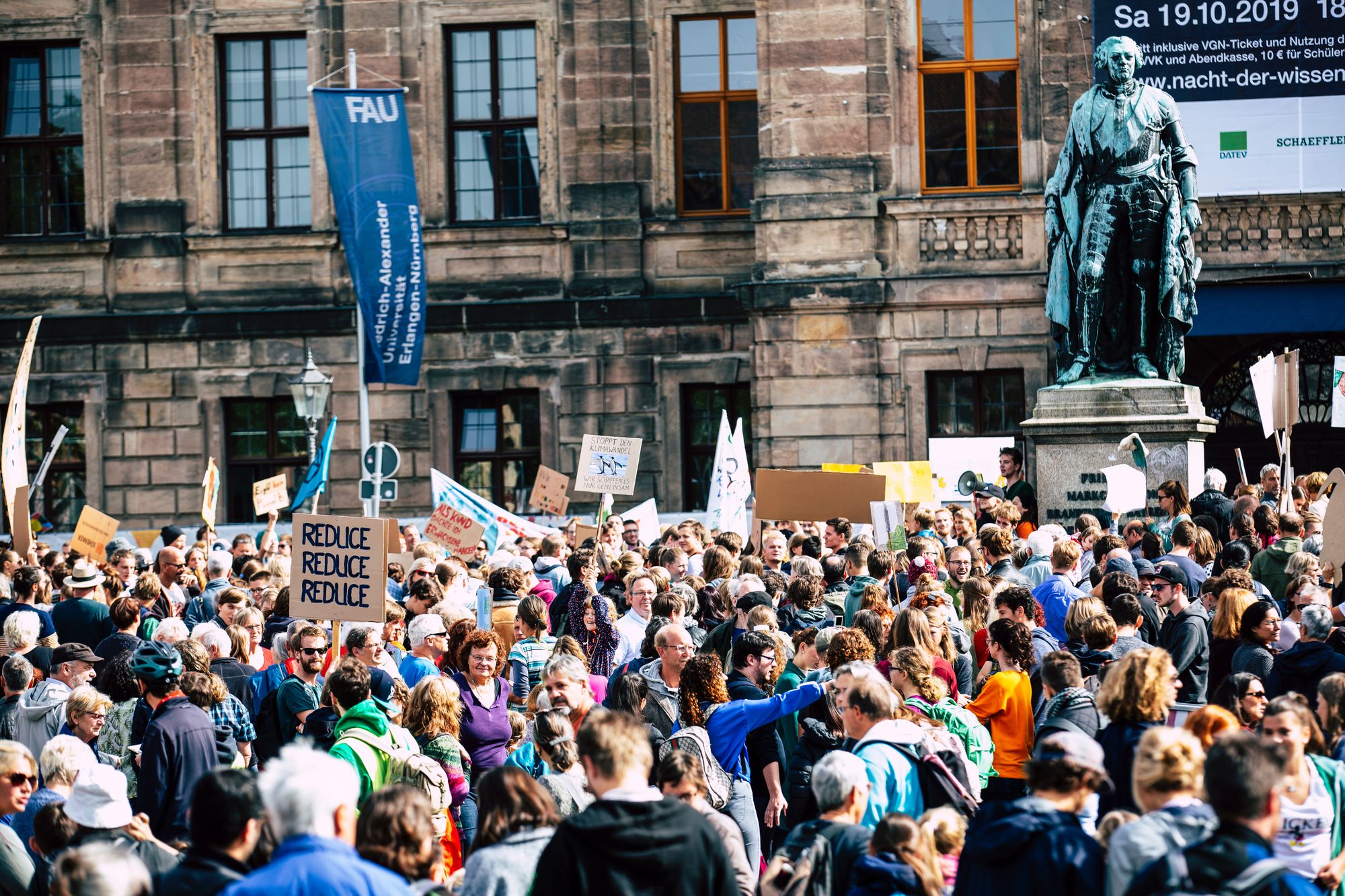 'People like simple ideas and are right to like them. Unfortunately, the simplicity they seek is only to be found in elementary things; and the world, society, and man are made up of insoluble problems, contrary principles, and conflicting forces. Organism means complication, and multiplicity means contradiction, opposition, independence.' - Pierre-Joseph Proudhon, The Theory of Taxation

The core issue of the above quote is one that haunts many who dream of a new world order, whether communist or fascist, progressive or conservative. The complexity of human life, and therefore of human opinion, dooms projects that rely on simplicity and conformity to fail. Attempts at Communism, with their centralised collectivisation, could not handle the idea of dissent; whilst fascist powers, with their unrelenting nationalism, acted with violence towards those perceived as different, either culturally or racially. These two ideologies are by no means mutually exclusive, but share a similar predicament.

The issue of human complexity is supposedly solved by liberal democracy, which seeks to create en environment where people of diverging faiths, cultures and philosophies can coincide in a stable society. Rather than tackling that complexity head on, liberal democracy became, as the economist Francisco Mejie Uribe describes it, 'a story of gradual moral privatization and a steady retreat from moral conflict.' By managing conflict through a well-established state and representative democracy, citizens of all stripes can participate in a society largely isolated from complexity or conflict by handing over the responsibility for dealing with them to politicians or state bureaucrats.

Whilst seeming positive, managing social conflict in this way has two negative effects. The first is explained nicely by Uribe himself, who believes that in our current democracies we are:

'ill prepared to defend our own moral intuitions precisely because we live in societies where moral conflict was, until recently, minimized by design. So it comes as no surprise that we do not really know how to respond to the rise of global fundamentalism, with its impetus to aggressively moralize the public sphere.'

The second, though not seen by Uribe, is that in drastically minimising the possibility of having to disagree with one another, we have also surrendered our ability to agree with one another in constructive and empowering ways. The more this minimisation occurs, the more we come to find discomfort in conflict, and the more we desire to mitigate this conflict through representatives, institutions, or perhaps powerful leaders.

On a personal level, this means handing over your power to law enforcement or local government, out of a fear of coming into conflict with your neighbours. Whilst on a national level, this means handing over your power to disagree, and therefore agree, to politicians who will make the uncomfortable choices for you.  I would argue that such mitigation not only erodes democracy, but works in denial of the complexity of human nature. Government is, as the UK anarchist Colin Ward puts it, 'a crude simplification of social organisation' which, rather than putting our differences to good use, stifles them in the interest of preserving "order".

There is an irony to my claim that is certainly not lost on me. 'Surely', someone might ask me, 'we are taught to uphold ideals of free-speech and political freedom in our liberal democracies? Would this not lead us to believe in the value of disagreement, and do we not do this already by participating in democracy through voting?'

It is true that we are taught the values of free-speech, or free-association, civil liberty etc..., but how often must we employ those values in an interactive manner in society? We have free-speech, but how often do we have to practise it with our fellow citizens? Voting is anonymous and our only part to play in the political system, so unless you go out of your way to make a change, to conflict with others, there is no encouragement to do so. So the answer is really never, as we could easily go about our lives without ever having to make any serious or consequential decisions about what goes on around us (bar voting).

This fact is actually quite beneficial to our representatives. They are, in the words of James Scott in Two Cheers for Anarchism, 'anti-politics machines', who 'substitute healthy debate about quality' and 'depoliticise decision making' in an attempt to keep domestic conflict at a manageable level. Someone might ask now: 'but do we not wish for conflict to remain at a manageable level?' The answer to that is, yet again, no, as it is through conflict and disagreement that we can both retain our rights and enact meaningful change.

To be clear, it is not that I am arguing for a descent into chaos, where every minute decision is argued out to its full conclusion or fights break out on the street, but instead for a more participatory form of civil society in which face-to-face disagreement is valued for its freedom-preserving qualities. I argue, in agreement with Habermas in The Structural Transformation of the Public Sphere, that democracy is utilised best in a public sphere that is open, anarchic and conflictual, where confrontation, and sometimes incivility, allow us to counteract the naturally conservative behaviour of bureaucracies and hierarchies. 'Progress', as one writer Benjamin Shepard describes it, 'is built through clashes, conflicts, oppressions and antagonisms'.

However, whereas Habermas talks about a representative democracy adjacent to an anarchic public sphere, I would prefer to see a democracy comprised of an anarchic public sphere. That is because, without it, we will constantly be writing off power over our society to others. As, without conflict and disagreement, we cannot have people-based social and political power. If we are to have any desirable 'simple idea', as Proudhon described in, than that simple idea should, somewhat paradoxically, be that nothing is simple. We must come to appreciate and embody the complexity of our own social relationships.

To illustrate this desire, consider this passage from The Ecology of Freedom by Murray Bookchin:

'The matrix from which objective reason may yet derive its ethics for a balanced and harmonized world is the nature conceived by a radical social ecology — a nature that is interpreted nonhierarchically, in terms of unity in diversity and spontaneity. Here, nature is conceived not merely as a constellation of ecosystems but also as a meaningful natural history, a developing, creative, and fecund nature that yields an increasing complexity of forms and interrelationships.'

Representative democracies, as we know them, constantly work against the ideas of diversity and spontaneity. Even if they are multicultural, that multiculturalism is pushed under one banner, one nation, in which conflict and therefore contact between those cultures is drastically minimised for the purpose of comfort and control. The fact that communities who share the same democratic institutions can bitterly hate and distrust one another epitomises the isolated and rigid social structure we have created. The anarchist ideal, as explained here by Bookchin, is that we live a non-isolated life, a conflictual life that has the potential for creating peaceful cohabitation through mutual agreement, as opposed to the insecure peace through isolation as utilised by our current democracies.

Increasing acceptance of social conflict is essential to the anarchist vision or, for that matter, the vision of anyone who wishes to make life more democratic. As the sociologist Richard Sennett asserts in The Uses of Disorder, 'decentralised' and therefore democratic power may only come when the 'individual has to deal with those around them, in a milieu of diversity'. There has to be a 'refusal to regulate conflict', whether that be by controlling disagreements via the police or controlling uncomfortable debate via politicians. Until we do we shall remain 'so innocent and unskilled in the expression of conflict' that we 'can only view these disorders as spiralling into violence'.

Essentially, in allowing the state to regulate our differences, we become less capable of dealing with difference, whether of opinion, ethnicity or culture. As our intolerance grows, so does our dependence on systems of power that can separate us into calm, comfortable cocoons. This works so long as the state does not falter, but when it does, we are confronted with that which we hate most: conflict. It is in these moments of weakness, when we crave for nothing more than the return of order, that we are most at risk of falling prey to the fundamental and the totalitarian. Just as the economic decline of the Weimar Republic led to the rise of Nazi Germany, so could a decline in liberal democracy lead to a rise in tyranny.

If we wish to abandon the state and uphold democracy, then we must also abandon comfort and uphold conflict. If we want fundamentalist worldviews (both left and right) to lost their appeal, then we must embrace complexity. We have to learn to confront one another, to argue, to fight, and to eventually agree. Until we can work with one another again, until we can break free of our little cocoons, we will always need a state to protect us.

Photo by Markus Spiske on Unsplash