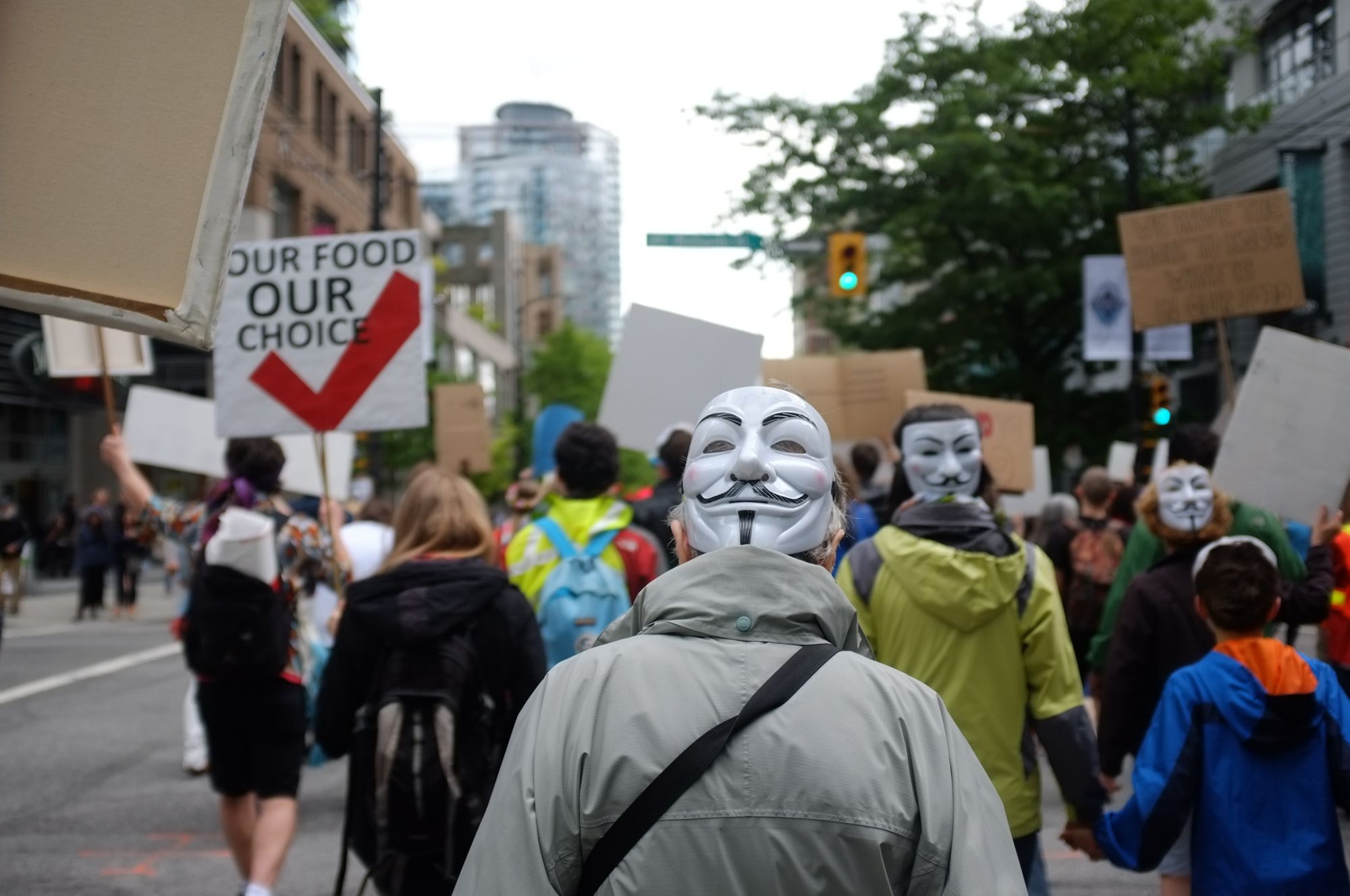 “ Beneath this mask there is an idea... and ideas are bulletproof.”

Western democracies have striven for years to maintain the status quo of a post-industrial information society structured around class and a capitalist economy. Any meaningful ideological change to this status quo has been minimised and fought with damage control, and the few that have gotten through seem to tend towards the radicalisation of existing ideology (see Trump and his forceful push towards an economy centred democracy).

Democracies cannot be blamed for trying to maintain the status quo. After all, the 20th century was marked by totalitarian regimes on both the left and the right, which undermined people’s rights and freedoms. The problem with the maintenance of economy focused democracies is that they leave no room for meaningful social and structural change in the search for equality.

The commodification of revolutionary ideology seems to be one of the ever-present mechanisms in capitalist societies which strive to maintain this fragile balance. It is a consumerist approach to revolution that seeks to monetise its ideas while ideologically neutralising any real threat to the status-quo. Imagery and symbolism are at the core of this mechanism, since they are the communication engine of our modern digitalised society.

Western culture has two main processes through which the commodification of revolutionary ideology is achieved. The first is an ideological transfiguration of already existing symbols, the second is a narrativisation of pseudo-realities.

A good example of the process of ideological transfiguration is the case of “Guerrillero Heroico”, a photo of Che Guevara taken by Alberto Díaz Gutiérrez, which has been made into posters, stickers, pins, T-shirts, bags, notebook covers, and other adorning trinkets. The transfiguration process has turned this image into an empty symbol, since it transmits an idea of change and rebellion against the world without any clear structure to that idea. It is not aimed at any concrete future or change to our lives and society. The photo has transitioned from a symbol of communist revolution to a whitewashed cultural phenomenon.

This specific transfiguration entails good and bad outcomes. It’s transition into popular culture does steer it away from radical communist propaganda and the totalitarian regimes that have a tendency to follow it. On the other hand, it also makes it too general to mean anything. If the symbolic nature of the photograph is not rooted in a particular ideology, then anyone can bend it to fit their own. The photo becomes a symbol for anyone who wants to rebel, but loses itself in the ambiguity that comes from that message. Its transfiguration has turned it into empty ideology.

Narrativisation of pseudo-realities as a process means that cultural production is created in moulds that oppose the mainstream. Popular culture can oppose the existing status-quo but it nonetheless exists in a space of meaningless ideology. Popular culture that presents revolutionary ideology tends to portray it in either past or unreal scenarios, making its underlying premises abstract and far away from our reality.

Hollywood’s blockbuster The Hunger Games sells you an empty revolution by standing against the ridiculous structure of a non-existing regime. Seeing the movie inspires us to act against this made-up regime, where oppressive structures are clearly visible, instead of looking around our actual world, where oppressive structures are hidden from the naked eye. In this way, the commercialisation of revolution also works as a misdirection.

I am not making the case that western democracies are conspiring against change, or that there is a cabal of politicians and businessmen somewhere discussing the best way to control any ideology that ventures out of the establishment. This phenomenon has a more real and down to earth cause: capitalist societies sell commodities to those who cannot be bothered. The flattening of ideology seems to be a side effect of cultural gentrification and the creation of mass culture icons. It would seem that the capitalist system is wonderfully rigged against action.

Herbert Marcuse describes an identical phenomenon in art called repressive desublimation, in which higher culture (in opposition to popular culture) is flattened for commercial purposes under capitalist societies and ends up losing its meaning, its uniqueness and its grit. It turns the purpose of art inside out and makes it a mechanism of maintenance. It could be argued that the commodification and commercialisation of revolutionary ideology is a type of repressive desublimation in which icons of revolution lose their symbolic meaning and become popular icons, devoid of any real significance.

It is clear then that there is a pattern of flattening of ideology, intricate symbolic systems and diverse ways of thinking. Capitalist theory praises its diversity and claims to be unbiased but the truth is, in its most subconscious layers, it erases any ideological difference.

Photo by Akshay Chauhan on Unsplash